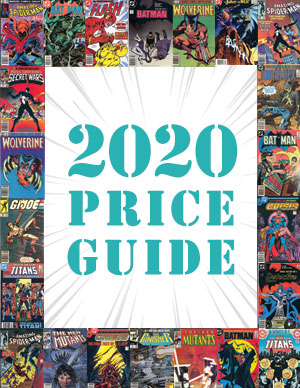 Many thanks to the collaborators, who all volunteered their time and advice to make this 2020 guide edition possible; readers are encouraged to support these superstars of our great hobby by patronizing their stores and sending them your variant wishlists! Let us know if you like our guide — your continued suggestions, corrections, and feedback are greatly appreciated!

Our inaugural 2018 edition of this guide marked our hobby's first comprehensive price guide for 1980's newsstand-exclusive cover price variants from Marvel and D.C. — covering the two heavyweight comic book publishers of the era. Last year for our 2019 edition we added missing issues and introduced new features such as our Market Reports & Articles section, and, another great collaborator joined our team: Shuster Award winner Walter Durajlija.

This year we are proud to be joined by two great additional collaborators: Jay Halstead (Overstreet Advisor and Director at the International Comic Exchange), and Conan Saunders (Overstreet Advisor and Vice President at MyComicShop). Some new guide features this year include a picture database for Marvel & DC variants (click any thumbnail you see within the guide pages to see the enlarged price variant cover), and expanded publisher coverage to now include CPVs from Archie, Gladstone, and Modern (special thanks to researcher extraordinaire Salvatore Miceli whose efforts made this large coverage expansion possible).

Readers should note that there are other publishers who produced Type 1A variants during this timeframe as well that we have yet to cover — collectors interested in exploring variants from other publishers such as Charlton (not to mention other types of variants) are encouraged to read Jon McClure's article published in the Overstreet Price Guide #40, p. 1010-1033, entitled "A History of Publisher Experimentation and Variant Comic Books" (also available to read online here).

First, let us discuss Marvel and D.C. Entering the 1980's, Marvel and D.C. each sold comics through two distinct distribution channels: "Direct Edition" copies were directly sold to comic shops on a non-returnable (but discounted) basis; "Newsstand" copies meanwhile were distributed to newsstands across North America, and unsold copies could be returned. In the beginning of the 1980's, all of North America got the same identical newsstand copies.

But starting in October of 1982, due to currency fluctuation, these publishers could no longer afford to charge the same 60¢ price on newsstands in population centers like Toronto, Vancouver, and Montreal — i.e. places where buyers would be paying in Canadian currency. For this reason, both publishers started to demand 75 cents from those newsstand customers north of the border. But instead of placing both US and Canadian prices on newsstand copies as they eventually did, from 10/1982, out to 8/1986 for Marvel and out to 9/1988 for D.C., these publishers produced two distinct batches of newsstand copies: a higher cover price batch and a lower cover price batch.

Each batch was produced simultaneously with the other copies on the same manufacturing equipment, so all are 1st print copies (each batch involving only a change of the black/key plate), but the number of copies created for each batch was different, with each batch sized to fit the corresponding market: the Direct Edition batch size was informed by comic shop order levels, and each of the two Newsstand batch sizes were informed by the size of the target market and newsstand sales trends. The smaller batch of higher cover price newsstand copies — the copies today known as "Type 1A cover price variants" were therefore sold in vastly smaller numbers, were purchased mostly by readers, and have estimated survivorship of ~2% of copies (CGC census data for most issues shows variant rarity between 1-2% of census copies), as we illustrate below: 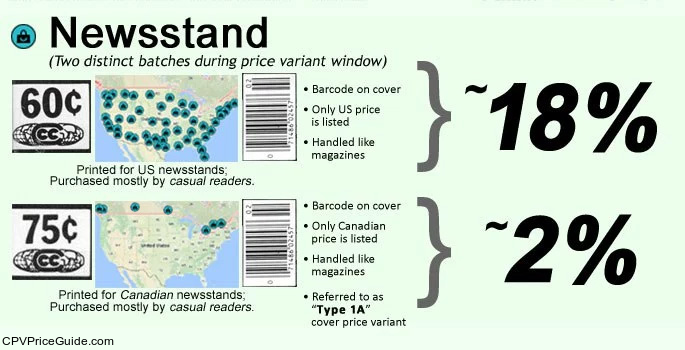 This year, thanks to the research efforts of Salvatore Miceli, we are expanding our guide's coverage to include additional publishers. Each of these publishers has varying dates during which price variants were published, and there are also different distribution circumstances to keep in mind versus over at Marvel/DC: for example with Archie, direct editions were generally only introduced much later (with certain titles only getting their first direct editions way out in September of 1988), with early 1980's keys like Archie's Girls Betty and Veronica #320 (1st Cheryl Blossom Appearance) having had only newsstand distribution. Archie kept publishing their price variants well past the end of the '80s and into the '90s (Gladstone also published variants into the 90's). Read more detailed introductions at the following links about the variants from Archie, Gladstone, & Modern.

The team of collaborators have independently submitted advice on variant values for the top key comic books. The median of those advised values collected for each issue — i.e. the middle ground number at which exactly half of advisors gave an equal or lower value opinion and half of advisors gave an equal or higher opinion — were used to compile a Top 100. By comparing these median advisor values for each issue against the "base Direct Edition value" for those same issues, a variant premium was discovered which helped inform the rest of the guide. The base Direct Edition values were determined by (1) an extrapolation of observed marketplace asking prices for the issue around the research period of August-September 2019, and (2) opinions from up to three different popular comic book price guides.

This guide is presented on a best-efforts basis, but none of the included information is guaranteed to be free of human error; and due to the sheer volume of issues included in the guide, it was not possible to individually verify all information issue by issue or to confirm the existence of every variant by observing a photograph of each variant proving its existence. We have included Marvel & DC variant pictures this year, with 92% picture coverage; for those issues we were unable to find, while there is reason to believe the variants may exist, is it also possible that certain included issues were actually direct edition exclusives lacking newsstand distribution. Therefore you should use this guide only as one tool among your comics research tool-belt, and you should verify information with other sources before acting. Expected variant cover price, for example, can be error-checked by referencing a direct edition copy and looking up the small-print Canadian price tag — that small-print price would then be the expected cover price used for the smaller newsstand batch.

Information columns presented in the guide are: Issue (and date), Direct Edition value, the expected cover price found on variant newsstand copies, and finally our guided Variant values (all guided values presented are for "raw" copies; all guided values are presented in US Dollars). The final column is used to indicate when the variant for the issue has been confirmed at CGC, i.e. at least one variant copy appears on the CGC Census as of 8/27/2019; when found, we show the number of variant copies on record as of that date. At the bottom of each row, a Note may appear for a given issue for noteworthy items such as 1st appearances; Advisor notes are displayed in green. In the full guide pages for each title, rows are highlighted in yellow by noteworthy value above a threshold. Direct edition value columns are highlighted with a pink circle in cases where noteworthy value disagreement among price guides was spotted and flagged.

CGC census information is presented throughout the guide, comparing the year-over-year census counts for both the main/regular census entry and the variant census entry. The census counts shown are drawn from the 8/21/2018 census snapshot for last year's counts, and the 8/27/2019 census snapshot for this year's counts. Note that as of May 2019, CGC now catalogs variants on their census under the name "Canadian Price Variant" while pointing out the variant cover price on the right-hand side of the label. As of the time of guide publication, CBCS has not yet released their census. As of October of 2018, CBCS began denoting the variants as "Canadian Price Variant" with the cover price included in the label name itself, e.g. "75¢ Canadian Price Variant."

Example CBCS and CGC labels (as of time of guide publication):

Also see:
• Detailed Walkthrough of Canadian Price Variant Rarity Graphics
• The Top 100 Variants of the 2020 Guide
• Educational Images Sellers May Include In CPV Listings (Free Usage)
• Past Price Guide Editions
• We are proud to have received this Letter from Dave Sim

Masters of the Universe (#1-2) Price Guide


BACK TO TOP
The information within CPVPriceGuide.com is presented on a best-efforts basis, but none of the included information is guaranteed to be free of error and therefore you should use this guide only as one tool among your comics research tool-belt, and you should verify information with other sources before acting. Please read the full methodology & guide usage information. Our latest price guide edition of our comprehensive guide to Canadian Price Variant comics is the 2020 edition, published November 2019.