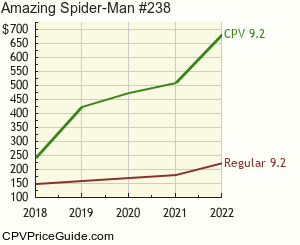 Find Amazing Spider-Man #238 CPVs on eBay »
Amazing Spider-Man #238 75¢ Canadian Price Variant Issue Notes:
1st Appearance of Hobgoblin; Came with Tattooz
#3 in this year's Top 100.
Angelo notes: Rumors are still circulating that the Hobgoblin will be coming to the big screen so it's only a matter of time. In September 2021 a 9.0 CGC sold for $847, June an 8.0 CGC sold for $600 and an 8.5 CGC SS sold in May for $1017. In 2020 the following grades sold for breakout prices: 4.0 CGC for $160 in October; 5.0 CGC for $335 in July; 9.2 CGC for $800 in March; 9.8 CGC in March sold for $4650 becoming the highest amount paid for any CPV on a public auction only to have this price shatterered once agian a few months later in November when a second copy sells in another public auction for $7800. This has become a must have book for the serious C.P.V. collector and/or investor.
Ben notes: Classic cover contender. Also refer to my prior note in this separate 10/2017 blog post », and this 6/2021 update »
Conan notes: Example variant sales at MyComicShop: a raw 5.0 (no tattooz) on 12/24/2020 for $112, a raw 8.0 on 2/15/2021 for $420, a raw 2.0 on 3/20/2020 for $80, a CGC 8.5 on 12/26/2019 for $350
Jon notes: Amazing Spider-Man #238 is not incomplete without Tattooz. It was printed in a standard, old-fashioned way, independent of the Tattooz inserted later, just like many other in-house or paid advertisement inserts from any era. This problem originates from the fact that the comic's cover mentions Tattooz, as does the cover to Fantastic Four #252(3/83). Ideally, the Tattooz are absent due to the slow degradation of the contents that will eventually affect the paper quality inside. Overstreet Guide listings are confused, forced to respond to CGC's myopic view. Once upon a time, I called Bob Overstreet and told him that the Fantastic Four #252's Tattooz were being used as Amazing Spider-Man #238's Tattooz and that the cure was to list them as same value, which he agreed with and subsequently did so. Collectors aren't sure what to believe and that's how the myth is perpetuated, the myth of being incomplete without Tattooz. At some point, although my original note remains in the guide about the switching of Tattooz between books, this was changed back to the original mistaken listing (including the explicit mistaken statement that no Type 1a Canadian variants exist with Tattooz) with two values, with and without Tattooz. Fantastic Four #252 is listed in the Overstreet Guide #50 at $8 with Tattooz and $6 without in NM-, and Amazing Spider-Man #238 is listed at $180 with and $85 without in NM-, a discrepancy that highlights this dilemma, with Tattooz worth between $2 and $95 for the same useless item, which is ridiculous. Worse yet, the Tattooz are valued at $10 higher than the book by itself! All any grading company would have to do is say ''no Tattooz'' on the label and have a blue label, leaving it to the collector to decide on the relative importance of its inclusion. There is little difference between the mistaken use of the term ''Canadian Edition'' for Type 1a variants and insisting books without inserts are incomplete; thankfully the misidentification of "Canadian Edition" now reads "Canadian Price Variant." Any NM- or better copy should be taken seriously with or without the insert. Tattooz were inserted in Amazing Spider-Man #238 and Fantastic Four #252 and advertised on the covers; Captain America #279(3/83) and Star Wars #69(3/83) were also given Tattooz inserts without any advertising on the covers. Because neither of the latter books are considered incomplete without the inserts and would receive CGC blue labels, it stands to reason that Amazing Spider-Man #238 and Fantastic Four #252 are not incomplete without Tattooz either; the only difference is the ads on the covers, and those are irrelevant as they are part of the cover of the comic book. The only cure to allow for promotional extras, be they trading cards, inserts, or spare tires, is to eliminate them from the nomenclature as the extraneous and unnecessary items that they are, at least in regards to grading a book independently. Any insert loosely attached at the staple is not part of the book. If an item is glued into the binding it becomes part of the book, just as rebound comics exist, but those become a new and unique product that is not a variant. The day will come when Amazing Spider-Man #238 is selling for serious money and the color of the label, instead of the quality of the book, will largely determine the value, which creates an increasing financial incentive for inserting the Tattooz. If you are investing in this book, do you really think half of the value is in the Tattooz?
Paul notes: 75¢ variants of this issue did indeed come with Tattooz included; book is considered incomplete at CGC (green qualified label) if absent — read Jon's note as well, regarding CGC's treatment. A VF- Amazing Spider-Man #238 variant sold at PNJ Comics for $160 in 2018
CGC label note: 1st appearance of the Hobgoblin. Manufactured with "Tattooz" insert & sample. 75¢ cover price.
« #237
#239 »

This page: Amazing Spider-Man #238 value (75¢ Price Variant)
« Back to Amazing Spider-Man Comics, Full Price Guide Page
★
★
★
★
★
As one of the top 100 most valuable variants in our guide this year, we rate 75¢ price variant copies of Amazing Spider-Man #238 FIVE STARS as a collectible, and the hands-down preferable type to collect for the issue as compared to regular copies. In addition to everything the issue has going for it (as detailed in the issue notes in the page above), we note the price guide value movement since 2018. Regular copies in 9.2 have increased in value by $75 since 2018, or about +50% on a percentage basis. Meanwhile, CPV newsstand copies in 9.2 have outperformed notably, increasing in value by $445 since 2018, or about +185%. With a 75¢ variant NM- value of $685, Amazing Spider-Man #238 is part of the proverbial cream of the CPV crop, with a value greater than approximately 98% of our guide's entire coverage universe.

✔️Accepted answer: The answer depends on the type that you own. For Amazing Spider-Man #238, Marvel published a direct edition type (exceptionally well preserved by collectors as direct edition comics were the type sold in comic shops), and two newsstand types which were sold to the general public on newsstands (a regular cover price version and the 75¢ price variant). If you own a price variant, lucky you, it is worth $685 in 9.2 (Near Mint Minus).

Suggested answer: Check whether the cover of your copy of Amazing Spider-Man #238 has a graphical logo or a bar code box. If it has a graphical logo, sorry to break it to you but you own a commonplace direct edition copy which is worth about $225 (still, that's not too shabby).

How rare is the Amazing Spider-Man #238 75¢ cover price variant?

✔️Accepted answer: As of the September 2021 CGC census, the price variant has census rarity of 2.6%, with 217 price variant copies on record versus 8031 regular copies.

What is Amazing Spider-Man #238 worth in VF/NM condition?

✔️Accepted answer: The direct edition (logo on cover) is worth about $151 in VF/NM whereas the 75¢ newsstand variants are worth $459.

Why are the Amazing Spider-Man #238 newsstand cover price variants worth so much more than the direct edition copies?

✔️Accepted answer: As collectibles, direct edition copies are already at a disadvantage compared to newsstand copies in the highest grades, because direct editions were extraordinarily well preserved as the distinct type sold in specialty comic shops. The comic shop owners ordered direct edition copies of Amazing Spider-Man #238 at a discount to cover price, but on a non-returnable basis (the graphical logo was to tell non-returnable copies apart from their returnable newsstand counterparts). When their orders arrived, the comic shop staff handled the books with extreme care to preserve their condition, and then the comic book collectors who shopped there typically preserved their purchases in plastic bags with backing boards. By contrast, newsstand copies were treated as reading material with no staff training to handle the books with any semblance of care, and they were then sold to the general public; unsold copies were returned for credit and typically pulped/recycled forward. Only those newsstand copies of Amazing Spider-Man #238 that were taken home and preserved by collectors would survive today in the highest grades. Among surviving newsstand copies of Amazing Spider-Man #238, the market area that received the 75¢ cover price newsstand copies was a restricted area representing less than 10% the population of the total North American newsstand market. That's because the destination market for 75¢ copies of Amazing Spider-Man #238 was Canadian newsstands — hence the name Canadian Price Variant as a short-hand for 75¢ Price Variant. All of this adds up to a market value for the 75¢ variant approximately 204% higher than the direct edition in Very Fine / Near Mint (9.0) condition, as of our 2022 CPV Price Guide Edition.

In VF condition, how much is Amazing Spider-Man #238 worth?

What is the value of Amazing Spider-Man #238 in Fine condition?

What is the approximate Amazing Spider-Man #238 value in very good condition?

✔️Accepted answer: Down in VG (4.0) Very Good condition, the direct edition version of Amazing Spider-Man #238 is worth about $57 whereas the 75¢ newsstand variants are worth $172.

What is the Amazing Spider-Man #238 price guide value in good condition?

✔️Accepted answer: The price guide value way down in GD (2.0) Good condition for Amazing Spider-Man #238 is about $28 for the direct edition version whereas the 75¢ newsstand variants are worth $86.

Has the Amazing Spider-Man #238 75¢ variant from Marvel been a good investment? 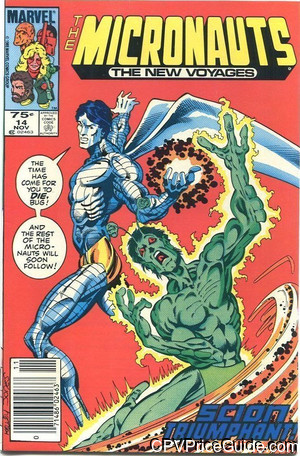 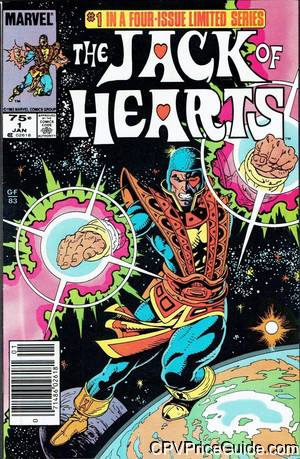 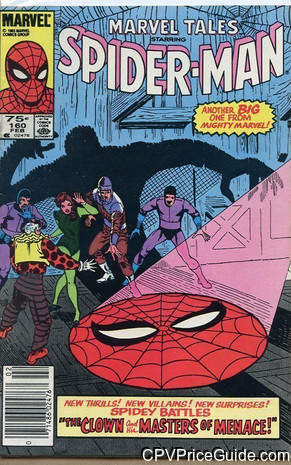 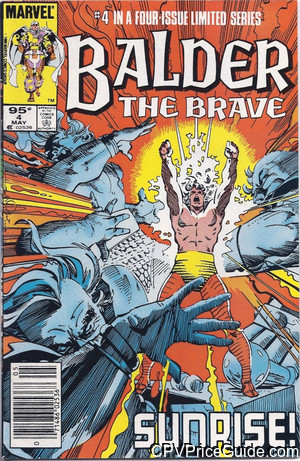